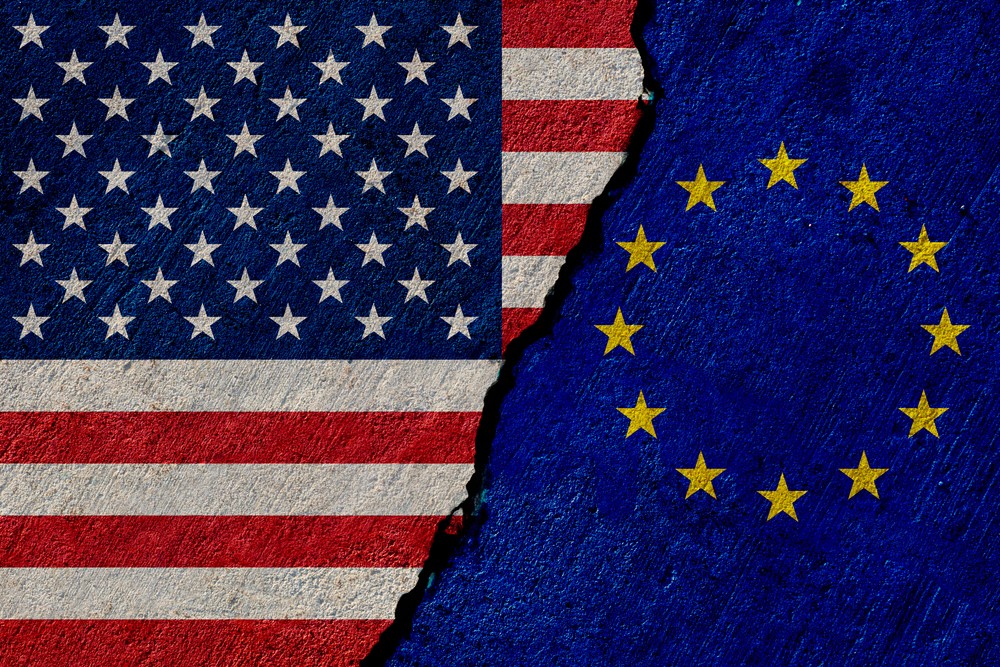 Four U.S. states figured among the top ten regulated online gambling markets in the world during the first half of 2022, with the U.S. as a whole soaring past the UK to become the largest market in the world at country level.

Combined gross revenue from legal online sports-betting and gaming across the U.S. soared by 83 percent to an estimated $9.8bn in the year to June 2022, with the total addressable market set to blaze past the symbolically significant $10bn mark before the close of the year.

Gross revenue from U.S. online sports-betting more than doubled year-on-year to an estimated $4.93bn in the 12 months to June 2022 and, in doing so, overtook the parallel U.S. iGaming sector where GGR is estimated to have risen by two-thirds to $4.86bn on the same basis.

While legislative progress has slowed somewhat this year, the online sector’s tearaway growth reflects both an unprecedented deluge of successful gambling expansion bills in recent years and a step change in consumer habits since the onset of COVID-19 that has proven relatively sticky following the reopening of land-based venues.

The collective ascent of U.S. state-level online markets to the $10bn mark means that the country as a whole has emphatically delivered on its promise to become the largest regulated online gambling market in the world within four years of the repeal of PASPA.

Having catapulted past Australia in 2021, the U.S. has now outstripped the mammoth UK online market, which remained the largest in the world by some distance as recently as 2020. 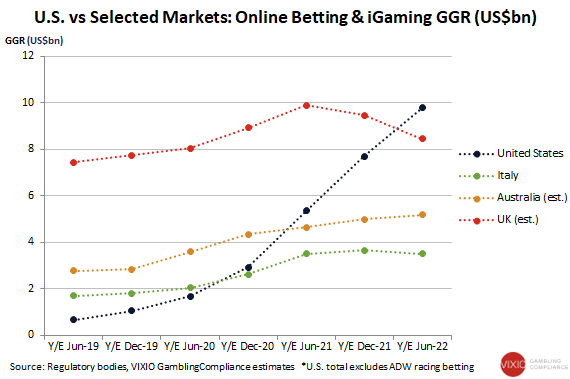 VIXIO GamblingCompliance estimates that UK online net gaming revenue declined by 14.6 percent to £6.11bn over the year to June 2022, with the rollout of tighter affordability measures ahead of the UK government’s Gambling Act review having significantly depleted rates of spend per active player.

Adjusting for the impact of free bets and credits, UK online GGR is likely to have settled at closer to £7bn (US$8.1bn) over the same period, a figure which would have settled just below the $9.8bn stateside total if converted at 2021 exchange rates, prior to significant depreciation of the pound against the U.S. dollar in the year-to-date.

At a more granular level, our analysis indicates that individual U.S. states continue to disrupt the highest level of a global ranking of regulated markets by gross gaming revenue, which has long been dominated by European jurisdictions.

VIXIO GamblingCompliance estimates indicate that four U.S. states, three of which are home to legal iGaming as well as sports betting, figured among the world’s ten largest regulated online markets in the first six months of this year.

The $2bn+ New Jersey and Pennsylvania markets, which cracked the top ten in 2019 and 2020 respectively, overtook France, where online casino games remain illegal, to occupy fourth and fifth places in the global comparison during the first half of 2022.

Michigan entered the global top ten in its debut year of operation in 2021 and is estimated to have surpassed the comparatively mature Swedish online market to take seventh spot in the year-to-date comparison.

11th-placed New York, which immediately dwarfed New Jersey and Illinois to become the largest state-level online sports-betting market in the U.S. after launching at the start of this year, is the fourth U.S. state to figure in the elite market ranking and the first to do so through sports-betting alone. 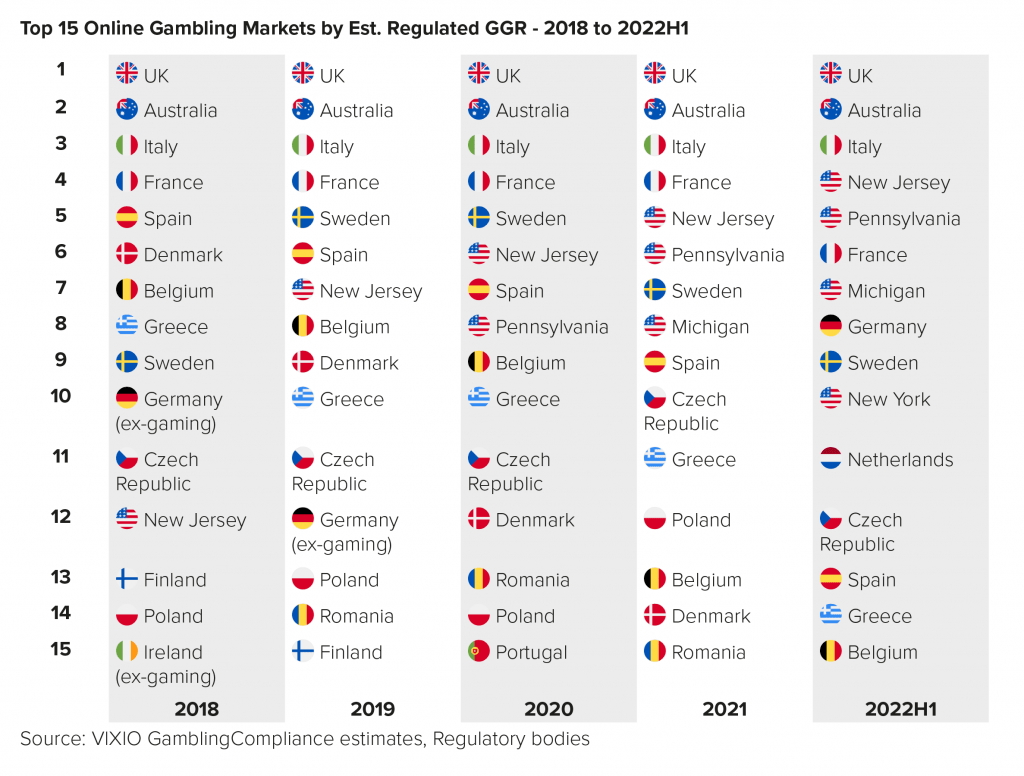 Europe, which remains the epicentre of regulated online gambling globally and yielded total online GGR of around €24.5bn in 2021, was home to just two of the top five and five of the top ten markets in the first half of the year.

Germany and the Netherlands, which became fully regulated online gambling markets in 2021 after well over a decade of regulatory uncertainty and delays, are estimated to have figured in eighth and tenth respectively in the latest global market size comparison.

Though the issuance of online slots licences in Germany has only begun in earnest in recent months, tax data from the German Finance Ministry indicates that the country’s online slots market, limited to tax-paying operators under the new regime, will generate gross revenue approaching €1bn this year.

Further afield, VIXIO GamblingCompliance estimates that the mature, racing-centric Australian market overtook the UK to become the largest regulated online betting market in the world on a jurisdictional basis in 2020, before stretching that lead in 2021.

Though market-wide gross revenue is unavailable for Australia, VIXIO GamblingCompliance estimates that online sports-betting revenue across the U.S. settled broadly in line with overall online betting GGR, inclusive of racing, in Australia during the year to June 2022.

Further disruption to the established, Eurocentric order can be expected in the medium-term, with Ontario and Brazil expected to become US$1bn+ markets by the middle of the decade, according to VIXIO’s interactive Online Data Dashboards for Canada and Latin America. 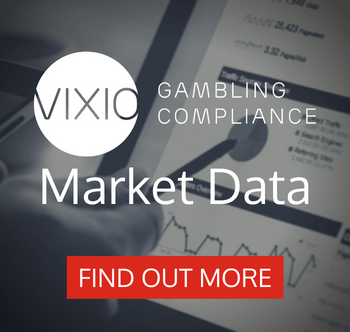 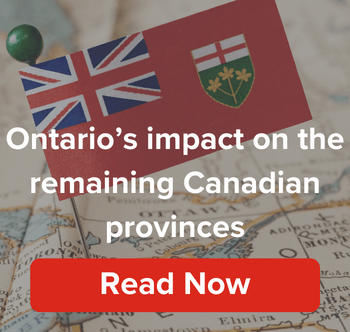 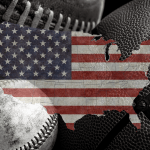